Two ‘A’s as in Oakland Athlethics that is…Making our ‘Must Add’ list this week  are two players with completely different credentials; One with power and one with speed. Our spotlight will be on Brandon Moss  and the guy with the best name in cereal, Coco Crisp!

Brandon Moss- 1B/OF-Athletics– This little owned multi-positional 28 year old is enjoying his best season in the major leagues. Since being called up earlier this month on June 6th, he has already been named the American League Player of the week for last week, belting 7 home runs and collecting 12 RBI. In the past 14 days, Moss has been ranked 7th among all batters in Yahoo! Leagues. His bating average over the past two weeks sits at a respectable .300 and he’s also score 11 runs on a team that is offensively challenged. 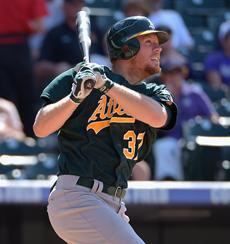 #37 1B/OF Brandon Moss is one of the Must Adds of the week and last weeks American League ‘Player of the Week”. Photo: By Doug Pensinger, Getty Images

We’re suggesting that while he remains on this hot streak and has manager Bob Melvin completely in his corner, you pick him up in most leagues. He is currently owned in just 23% of leagues but expect that number to rise over the next week or two especially if Moss can sustain his power streak.

CoCo Crisp-OF-Athletics- The only downside to this speedster is his injury issues. Over the past two seasons with the A’s, Crisp missed around 100 games and still managed to amass over 80 stolen bases. In fact last year, the 32 year old stole the most bases in a season in his long career-49! In Oakland he is taylor made because they need to manufacture runs due to their lack of power and Crisp fits the bill there. His batting average admittedly is below the Mendoza Line at the moment at .205 and that might scare some of you away, however he does have a career .273 BA so expect his current batting woes to change. 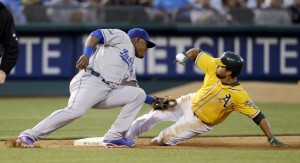 He seems healthy this season; on Tuesday night Crisp had 3 stolen bases in one game so we know his legs are fresh. In fact, his 36 consecutive steals without getting caught is still ongoing in Oakland. Should you have a need for speed, Crisp, ranked 28th among all batters in Yahoo! leagues over the past two weeks is still widely available. Owned only in 27%of leagues, he’s a must add in most formats and all leagues.