The Boston Celtics: Our take on their season; where do they go from here?

Now that the Boston Celtics, a franchise donning seventeen World Championship banners from the rafters of  T.D. Garden, has been officially eliminated from any further play this season, it is time to review and prognosticate on where they were in December and who will be with them going into next season.

The NBA lockout prior to the beginning of the 21011-2012 season hurt many teams. However it had worse of an impact on the Boston Celtic players more than most of the other teams in the NBA save for the Spurs and maybe the Lakers, due mainly to some of the aging stars on this storied franchise; Ray Allen turns 37 next month, Kevin Garnett 36,  Paul Pierce 34.

This was probably the last time these three will take the floor in the same uniform. Photo: Celticshub.com

Celtics coach Doc Rivers said that KG and Pierce both did not begin the season in ‘basketball’ shape and it took a while for the two of them to shake of their collective rust. After their loss on opening day against the N.Y. Knicks, the Celtics went 4-8 over their next 12. The rust on their so called ‘big three’ was beginning to show.

However, they deserve an enormous amount of credit for turning their season around and being able to finish the regular season fourth in the Eastern Conference 12 games over .500.  And, as everyone knows by now, they gave a pretty good showing of themselves throughout the playoffs except for game six in the Heat series when they had Miami on the perverbial ropes and allowed LeBron to go off for 45/15/5, while getting blown out of the game!

With their elimination on Saturday night in Miami, the media and fan base have already begun discussions concerning the future of some of the Celtics players; in particular the ‘big three’ of Allen, Garnett, and Pierce. Garnett is an unrestricted free agent, but we think he will more than likely get resigned for an additional two years- so also believes coach Doc Rivers. Now whether he’ll get to play both seasons is another story.

Ray Allen, another unrestricted free agent is unsigned for 2013 and with Avery Bradley poised to take over at the two, Allen will be traded to a team in need of some outside shooting and there are always plenty of them. Case in point take Steve Novak and what his presence did to help open for floor for the N.Y. Knicks.  And Bradley is already signed, (and quite reasonably) over the next three years at $1.6 million, $2.5 million, and $3.6 million.

Rajon Rondo of course will be going nowhere. He has three years left on his contact and is the centerpiece of the franchise. Brendan Bass, the great pickup from Orlando in the off-season, should be returning as well and will be negotiating his final $4 million contract which ends following the 2013 season. He played a key roll for the Celtics this season averaging 12.5/6./1.0 but was more than serviceable in the absence of Glen ‘Baby’ Davis.

Brandon Bass was an excellent pickup of the Celtics this season. Photo: thenbamemes.tumblr.com

As for game seven on Saturday night…”Honestly, I thought we had nothing left”, Rivers said of their 20-6 collapse at the end of the game. Changes are on the horizon. They did all they could with what they had. It’s time to move on…

In the final analysis, the Celts deserve a pat on the back for taking their post season play as far as they did with the personnel they had. Even with their age & their lack of quickness up and down the court, they still came within one game of getting to the finals. Although we couldn’t see a very much younger and faster OKC team with a stacked bench losing to the Celtics in the finals, our hats are still off to them for a job well done by the team, and their standout coach, Doc Rivers. 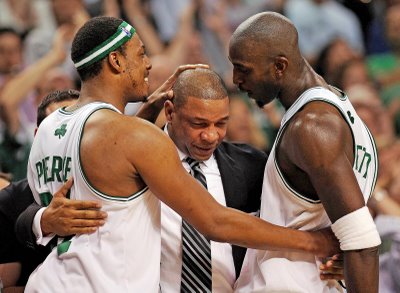 Well-liked coach Doc Rivers deserves much of the credit for the Celtics run this season. Photo: Celticstown.com

6 comments on “The Boston Celtics: Our take on their season; where do they go from here?”