The Baltimore Orioles: No longer for the Birds!

The baseball season is now officially 25% over, and if you stop and take a look at the the standings of all the teams in both leagues, one team glares out so stunningly, that you find yourself squinting and staring at the listings a second time; The Baltimore Orioles! I knew that they had been doing fairly well, but not this good!

So how and why have they been doing so well this year? You would have to start with the job that Buck Showalter has done with this club in a relatively short amount of time- a club devoid of many ‘superstar’ status type ballplayers. He is one of the more cerebral managers  that there has ever been in MLB. 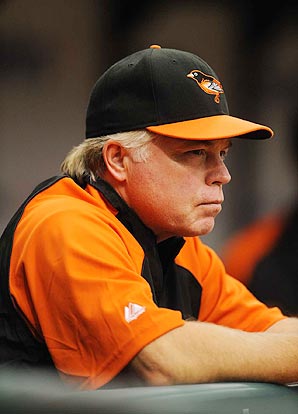 Orioles mananger Buck Showalter has taken a perennial last place team and has them at 13 games over .500 after a quarter season of baseball. Photo:Gary Bogdon/SI

If you’ll recall, Showalter took the Yankees, in the bottom half of their division, and led them into first place right before the strike shortened 1994 season. While at the helm, in Arizona, the Diamondbacks made their first ever appearance in the playoffs in just their second year of existence. Ironically, Showalter left both clubs in the seasons just prior to both of them winning the World Series!

Baltimore has been winning with the long ball much the same way that Earl Weaver did throughout his time with the club. With just 9 stolen bases among the entire team, one can see that they are not built for speed…

OFAdam Jones has been on a tear all year and although he is just one season removed from hitting a career high 25 HR he is currently on pace to reach 56! OF Nick Markakis will probably match his career HR mark and although batting just .258, he is a career .294 hitter so he’s due to come on soon. Then there’s J.J. Hardy who is on track to repeat his 30 HR and 80 RBI from a season ago.

As far as the Oriole’s pitching is concerned, they boast four RP with ERA’s under 2.00; Darren O’Day 1.37, Luis Ayala 1.64, Pedro Strop (a featured RP on Fantasy Furnace) 1.14, and closer Jim Johnson 0.92 with 15 saves-none blown. Throw in Taiwanese rookie Wei-Yin Chen at 4-0 and Jason Hammel 5-1 and you have quite a formidable team.

If Baltimore continues to soar in the standings, (they are 13 games over .500 as of Saturday), the early favorite for A.L. Manager of the year, has to be Buck Showalter who has already garnered that title twice before. And if the Red Sox and Yankees currently in last & second to last place respectively in the A.L. East continue to struggle, it will allow the Orioles to gain a strong hold on their first place position. No, you can’t say that this team is ‘for the birds’ any longer…

10 comments on “The Baltimore Orioles: No longer for the Birds!”