The death on Wednesday of 20 year NFL veteran and 12 time pro-bowler Linebacker Junior Seau, from a fatal gun shot wound to his chest, was shocking to most of us when the news first broke. But, as NFL refs can be heard saying during most games, “upon further review” it seems that his passing was just another in a series of deaths from the ill-fated 1994 AFC champs, the San Diego Chargers. 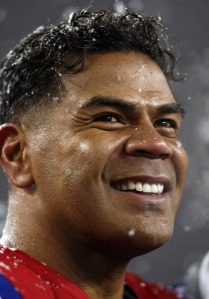 Seau, upon his death became the eighth Chargers player from that glorious 1994 season which culminated in their franchises only Super Bowl appearance, and loss, in 1995. None of the players from that team was over 44 years old when they died. Here is the list of all eight:

Junior Seau, LB, 43, on Wednesday, from a gunshot wound to his chest.

Besides the pure tradegy of losing so many young and talented players, one cannot help but wonder why so many have perished from the same team. If you are proned to believe in curses, then the 1994 San Diego Chargers team is the poster child for ill-fated ones!

We do not have all of the facts surrounding Junior Seau’s untimely death, but what we do know is that following a physical confrontation with his girlfriend late in 2010, his last in the NFL, he drove off of a cliff. Some claim that it was a suicide attempt. Seau told the police that he ‘fell asleep behind the wheel’.

What we DO know is that several ex-NFLers have died from repeated head trauma and/or concussions which caused them to suffer from such things as depression and dementia, which in many cases lead to suicide. The exact diagnosis of these players was progressive degenerative disease known as chronic traumatic encephalopathy (CTE).

Chicago Bear safety Dave Duerson who took his own life in 2011 also from a gunshot to his chest, suffered from this disease which was discovered after he died through an autopsy which Duerson himself requested prior to taking his life.

The point is that Commissioner Goodell, who has been a leader in the fight for a ‘safer’  NFL for several years now, may be onto something  although he is not without his share of critics and football ‘purists’. They say he’s ‘changing the game’ too much and that the NFL is strictly a ‘quarterback lead, offensively driven’ sport now that so many restrictions have been levied on team’s defenses.

Maybe I am just in the minority, but I watched all 11 post season games this past season which included the Super Bowl, and I did not feel any less entertained or lost any enjoyment from watching them with Goodell’s new edicts in place. Nor did the television audiences who broke several ratings records during the 2011-2012 season.

We’ll have to wait and see what additional information gets uncovered concerning the death of Junior Seau. If he took his life because of the effects of CTE, and part of reducing the liklihood of other players sustaining this disease comes in the form of banning a Jonathan Vilma or any player from any team in the future, then what’s so wrong with possibly saving another player’s life?

5 comments on “With Junior Seau’s Death, The Chargers ‘Curse’ Continues…”