(VIDEO):With the Indiana Pacers up 107-94 with 3:29 left in the 4th quarter against the Milwaukee Bucks, Larry Sanders runs over Danny Grainger and then has a verbal confrontation with George Hill. That’s followed by Sanders and David West jawing at each other, resulting in Sanders  poking West in the face. Grainger, attempting to defend Hill,  then takes a swipe at Sanders who goes berserk and runs after Grainger. 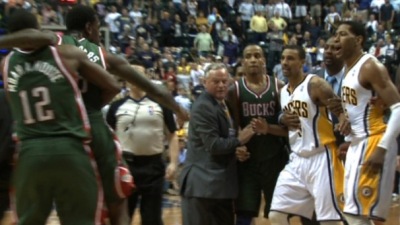 Milwaukee Bucks Larry Sanders has to be restrained in game versus the Pacers. Photo: fox59.com

Ultimately, Sanders is ejected and hears a chorus of boos as he is escorted out of the arena. It’s time for some of the players in the NBA to take some anger management classes as this type of reckless abandon takes place far too frequently in the league. Here now is the video of the entire incident: