As we enter week 3 in fantasy baseball leagues, we are beginning to see a bigger sampling of the player’s performances in your leagues and on the waiver wire. Most batters have now had about 30-35 ABs while SP’s have had at least two starts under their belts. Closers have also had several opportunities to add, or subtract from their resumes. Here are some waiver wire picks to consider as week three gets underway on Monday…

J.D. Martinez-OF-Astros- The 24 year old outfielder in his second major league season, already has the 4th most RBI’s in MLB. He is currently the only Astro to hit safely in all nine games. Martinez has scored 5 runs, and has 3 HR’s to go along with his 10 RBI while batting .353. He is owned in about 50% of leagues and is definitely an add in AL only leagues and someone to take a flier on in all 12+ leagues. He already has become one of our borderline sleeper candidates even at this early stage of the season.

#14 OF J.D. Martinez hitting one of his 3 HR this season. Photo: Matt York/AP

Omar Infante-2B-Marlins- The former Detroit Tiger and Atlanta Brave veteran either just loves playing for Ozzie Guillen or he’s taken some of the mysterious Ryan Braun PED’s that no one can detect because his early season numbers are almost Babe Ruthian! In just 9 games he already has 4 home runs. Last year with the Marlins, the 30 year had 7 HR’s in 579 AB. Currently he has  scored 9 runs and has driven in 6 while batting a hefty .353. We don’t think he can keep this torrid pace up, but if you need a speculative 2B and want to ride this streak out, we couldn’t blame you. Just keep in mind he will come back down to earth at some point.

#12 Omar Infante shows off his recent power with one of two home runs he hit in the Phillies home opener this season. Photo: cbssports.com

Ramon Hernandez-C-Rockies- Entering his 14th major league season, this well travelled vet has been revitalized in Denver. Maybe it’s the thin air which we know has given the Rockies true home field advantage for years, and this year is no exception. Colorado has scored 32 runs in their 4 home games this season while only amassing 10 in their 3 away games. Hernandez has hit 2 HR’s, driven in 6 and is batting .320. In his last 2 years, with the Reds, ’10 and ’11, he batted .297 and .282, so his average is legit. He is currently the 7th ranked catcher in Yahoo! leagues and if he stays healthy can hit 15+ home runs. You could do worse than Hernandez who is owned in only 15% of leagues.

Jonathan Niese-SP-Mets- The 25 year old southpaw has beaten both Mets rivals this year, Atlanta and Philadelphia, in his first two starts. To go along with his 2 wins, Niese has struck out 12 and has a 2.13 ERA and a 0.95 WHIP. He has had a propensity to give up the long ball as evident by the 20 homers he gave up in ’10 and 14 last year, but he hasn’t given up any in the 12 innings he’s pitched so far this season, and if he continues to improve in that area, there’s no telling how well he can do. Niese will face the offensively challenged S.F. Giants in his next start on Thursday. He is available in 65% of most leagues and should be added in 12 team and deeper leagues. 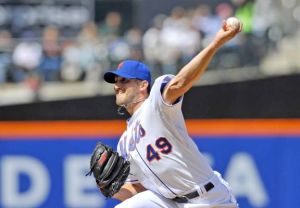 Jeff Samardzija-RP-Cubs- You don’t have to know how to pronounce his name-you just need to know that this reliever turned starter this season, is off to magnificent start winning his first two games in that role. What impresses us even more is his stellar control as this 27 year old who has spent all 5 of his major league seasons with Chicago, has 13K’s and just 1 BB in 13 2/3 innings. He is just one year removed from striking out 87 in 88 innings as a reliever so he has untapped potential. He’ll face Miami next and then St. Louis, who he’s aready beaten this year, in his next 2 starts. Samardzija is available in over 40% of leagues and deserves your attention as a sleeper candidate. 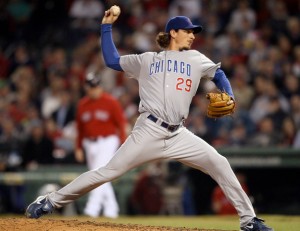 #29 RP Jeff Samardzija with his 2-0 start and 13 K's has become one of our sleeper candidates. Photo: Elsa/Getty Images of North America