Is Bud Selig that much different than Ozzie Guillen?

The Miami Marlins suspended Marlins manager Ozzie Guillen 5 games for praising Cuban Communist leader Fidel Castro in an interview published in Time Magazine. The Marlins skipper said he “loved” Castro. “I respect Fidel Castro. You know why? A lot of people have wanted to kill Fidel Castro for the last 60 years, but that [expletive] is still here.” The comments were insensitive to Cuban-Americans who were up in arms after hearing the remarks.

Anyone who has followed Guillen’s managerial career should not be shocked or surprised by anything that he says, as this has been his M.O. since he first became a major league manager. He seems to always seek out controversy and isn’t happy until all the attention is on him and whatever he spewes out to the press on a given day. That’s what we know about Ozzie Guillen.

But what about MLB commissioner Bud Selig? No, he hasn’t made his sentiments public with respect to how he feels about the famous dictator, at least not in words, but if actions truly speak louder than words, then he has already gone out of his way to pronounce himself ‘close enough’ to Castro to watch a baseball game sitting right along side of the bearded ruler. 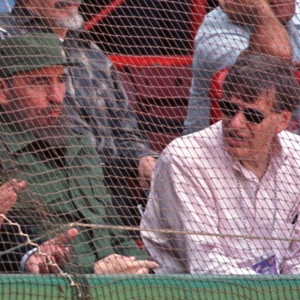 What could these two possibly have had to talk about? Maybe the commissioner was discussing how awful it is that many Cuban ballplayers have spent weeks on crafts as small as rowboats, with just the clothes on their backs, in order to flee the persecution they are under in Cuba, in order to find refuge in the U.S. Perhaps he was he chatting with Castro about the Cuban-Missle crisis of 1962 in which this country and the world came as close to the outbreak of WWIII as we ever have. We know that Selig didn’t need Castro’s support or endorsement of MLB; it was flourishing without the loud-mouthed dictator’s two cents and who would care what he said anyway?

Since the release of Guillen’s comments to the public, Selig has stated to the press that he found the manager’s remarks concerning his praising of Castro to be ‘offensive’. Clearly it couldn’t have been that offensive to Selig. I mean after all didn’t he sit with the monster himself just 90 miles off the shores of Miami? If the word ‘hypocritical’ has crossed your mind, then you can plainly see how to some, what Ozzie Guillen said could be taken just as ‘offensively’ as what the commissioner did 13 years ago. What sort of punishment, if any, do you think the commissioner would have imposed on Guillen if it were left for him to do so? We’ll never know but really, is Bud Selig that much different than Ozzie Guillen?

11 comments on “Is Bud Selig that much different than Ozzie Guillen?”