VIDEO: It was one of the wildest finishes to a game in half a century! Oakland vs Kansas City. Bottom of the 12th inning. Game tied 4-4. Two men on base. Royals closer Jonathan Broxton hits Yoenis Cespedes. Bases loaded. Broxton then amazingly hits Jonny Gomes the next batter, on his elbow and the game ends 5-4 on a walkoff hit-by-pitch! It was the first time a game ended on two consecutive hit-by-pitches since September 2, 1966 when Orioles pitcher Stu Miller hit Al Weis and Tommy Agee which gave the Chicago White Sox the victory. (watch the video below…) 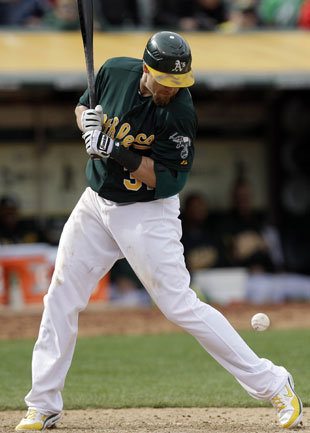 Jonny Gomes was involved in another walkoff hit-by-pitch last year when he was with the Nationals on a pitch by Brad Lidge of the Phillies. Photo: AP

4 comments on “VIDEO OF THE WEEK-Reliever Ties 46 yr. Old Record!”