A new play called Magic Bird opened up on Broadway on March 21, 2012. It is about the personal and professional relationship between two NBA legends; Earvin “Magic” Johnson and Larry Bird. Although I personally have not seen it, I have read the book “When The Game Was Ours” by Jackie MacMullan and found it fascinating. This play is based on actual conversations between the two super stars and what makes it even more authentic, is that both were involved in the creative process. They remain very close friends to this day following years of heated rivalries between them and their teams.

But let’s go back to the beginning and delve into some differences and similarities between Magic Johnson and Larry Bird. 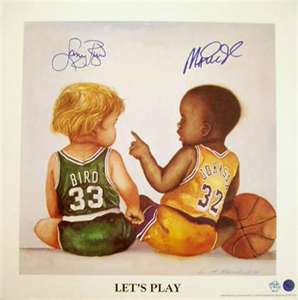 "Listen Larry, I'll let you have the higher number jersey but I'm going to grow up to be a better player than you!" Photo: http://www.sportsblink.com

Earvin Johnson Jr. was the first overall pick of the L.A. Lakers in the 1979 NBA Draft. He played under the spotlights of Hollywood. In his rookie season, he not only won a championship but was the NBA Finals MVP! He went on to win four more championships with the Lakers before announcing that he had contracted HIV in 1991. He made two comebacks and in 1996, at the age of 36, played just 32 games before finally retiring. He was elected into the Hall of Fame in 2002.

Larry Joe Bird, from West Baden, Indiana, was the sixth overall pick of the Boston Celtics in the 1978 NBA Draft. He came from a rural town and played in a blue collar city, quite the opposite of Magic. Three years later his Celtics won the NBA Championship. He repeated that feat two more times and was the NBA Finals MVP in ’84 and ’86. He also was the NBA MVP three times. His career, like Magic’s, was also cut short-Bird’s due to chronic back problems. He retired in 1992. He was elected to the Hall of Fame in 1998. 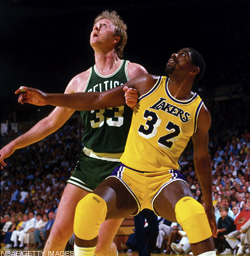 On the court, Magic Johnson and Larry Bird were the fiercest of rivals. Photo: Getty Images

Due their fierce rivalry, competitive nature, and extraordinary talent, the question that’s been raised hundreds of times is who was better: Magic or Bird? Safe to say that one could argue for either player. Personally, I lean towards Magic. His versatility was boundless. There wasn’t a position on the floor that he couldn’t or didn’t play. His athleticism was hands down greater than Birds. And, if you want to get technical, he won more championships.

Here are some interesting stats and achievements by Larry Bird that  you might want to take into consideration. Bird played better defense than Magic, and had 59 Triple-Doubles during his career- during regular seasons- and 10 during the play-offs. His career lasted 13 years and he averaged 24 points per game, 10 rebounds, and 6 assists.. He had a 49.5 % field goal average, 88.6% Free Throw average, and a 37.6% 3-point shooting average.

So we’re asking basketball enthusiasts, those old enough to have seen these two super-stars play, and just fans of the great game of basketball, who would you say was the better player? Magic or Bird?

10 comments on “Magic & Bird; Rivals & Friends-But Who Was Better?”