Fantasy Baseball: How These Closers Might ‘Save’ Your Season…

In Fantasy Baseball, catchers and closers seem to be the two most volatile positions. Catchers because they play the most demanding of all positions in baseball. Closers because they MUST perform at a high level in the shortest amount of time on the playing field of all other positions. Therefore, these two positions usually have the biggest turnovers during a season and as such, you don’t need to draft them in the earlier rounds. There are exceptions to every rule  especially in deeper leagues, however once the elite players in these categories are off the board, you  will need to come up with other options in order to make your team more viable.

That’s what we hope to provide you with here. A large number of relief pitchers who start the year as their team’s closer will not finish holding down that position. As the long baseball season chugs along, there will always be closers emerging. Here are some to consider taking fliers on or, in deeper leagues, even picking up in the final 2-3 rounds while everyone else in your draft room has started to doze off.

Grant Balfour/Fautino De Los Santos- Athletics- Balfour, the 34 year old Austrailian, was the set up man for Andrew Bailey last year and has the ‘potential’ to remain the Athletics closer throughout the season. In his favor he has averaged over a K an inning throughout his career and he pitches in a pitcher-friendly ballpark. What he doesn’t have is lot of closer experience, (he has just 10 career saves), and as we know there is a difference in the mindset of a set-up man vs that of a closer. Fautino De Los Santos, the hard throwing 26 year old right hander, appeared in just 34 games last year after being called up and struck out 43 in 33 innings. He is being groomed as the future closer and will be Balfour’s replacement if/when necessary. Balfour is owned in 65% of leagues; De Los Santos over 90%.

Jonathan Broxton/Greg Holland- Royals-Just a year removed from major elbow issues which forced Broxton to shut it down after appearing in only 14 games last year, the battle between him and Holland is on. As recently as Thursday, Jon Heyman of CBSSports.com wrote that the Royals are “leaning toward” Jonathan Broxton for their vacant closer job. Not exactly a ringing endorsement of Broxton, but in either case, he will have Holland breathing down his back. Last year the 26 year old Holland had an ERA of 1.80 and a WHIP of 0.93 in 46 appearances. He also struck out 74 in 60 innings. He’s pitched well this Spring despite his 5.19 ERA as it’s his 12.00K/BB that’s the most impressive. Either one of these closers could be a sleeper for your team. Broxton is available in 50% of most leagues; Holland 60%.

#56, Greg Holland will be giving RP Jonathan Broxton some stiff closer competition and could take over for the veteran reliever at some point this season. Photo: zimbio.com

Javy Guerra/Kenley Jansen-Dodgers- Last year’s closer Guerra had 21 saves in 23 opportunities and on Wednesday, Dodgers manager Don Mattingly confirmed that he will open the year as the closer. He had had some control  issues this Spring striking out 5 but walking 4 in 6 2/3 innings of work. Last year he didn’t average a K every inning but pitched economically. Kenley Jansen, the much more hard thrower of the two, is our pick to get the closing nod at some point during the season; we think sooner than later. Last year he struck out 96 in 53 innings and in 76 major league appearances he has an ERA of 2.12 and a WHIP of 1.03.  Amazingly, they are BOTH owned in 75% of leagues. We would recommend picking up Jansen should he become available.

Matt Thornton/Addison Reed- White Sox- This is a situation we think you can either avoid totally or monitor closely throughout the season. As of Thursday, manager Robin Ventura said he won’t ‘officially’ name his closer until the last game or two of the exhibition season. So what does that tell you? Clearly either he doesn’t have  a tremendous amount or confidence in his relievers or he will pick up where ex-manager Ozzie Guillen left off; with a closer ‘committee’. That’s the kiss of death for fantasy owners. Also in the mix, he could have Hector Santiago competing with Thornton and Reed. Thornton is available in 45% of leagues and Reed in 80%. Between the two, Reed maked for the better candidate for a ‘sleeper’ closer.

Chris Perez/Vinnie Pestano-Indians-Perez, last year’s closer in Cleveland, has had some oblique issues this Spring since February. However, manager Manny Acta, said, …”he’s right on schedule to be ready on opening day.” Generally throwing off speed pitches, Perez did manage to save 36 games last season although his ERA jumper from 1.71 in 2010 to 3.32 last year. If he has control issues or further injuries to his oblique, the closer-in-waiting here is 27 year old Vinnie Pestano. (sounds like a character in the Sopranos…) The hard throwing right hander has great stuff and excellent control. In his first full season in the major leagues, Pestano struck out 84 batters in 62 innings and finished the season with a 2.32 ERA and a 1.05 WHIP. Pestano is owned in around 25% of leagues  (Perez 80%), and if you’re in deeper leagues, we recommend stashing him if you can, as he could become another possible sleeper candidate. 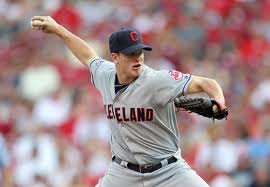 RP Vinnie Pestano is one of the closers who we've selected as a possible sleeper candidate. Photo: zimbio.com

2 comments on “Fantasy Baseball: How These Closers Might ‘Save’ Your Season…”