Mike D’Antoni’s reign as N.Y. Knick coach has ended. Did he resign under his own accord or was he ‘squeezed’ by James Dolan and his cronies? We won’t know for sure and it doesn’t really matter.

Personally, the Knicks were turning into an embarassment; unruly crowds, the most turnovers in the league, players sulking on the bench, and shots on the basket being made randomly & without any plan or foresight. The Knicks had, for the most part, turned into a team of swing players with no direction and no teamwork. 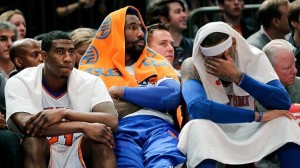 This was the scene on the bench in the 4th quarter in Chicago on Monday night, and a major part of the reason for D'Antoni's sudden 'resignation'. AP photo/Set Wenig

The winning run led by Linsanity which had proven to be so sucessful through some ten games, did three things: It  prolonged the inevitable resigning/firing of D’Antoni; it exposed Jeremy Lin once teams started watching more films and began preparing and double teaming the 23 year old which flustered him and basically took a major part of his game away; and once Carmelo returned from his groin and wrist injuries, it showed D’Antoni and the fans that Lin & Melo could not co-exist in D’Antoni’s run and gun style of offense mainly because Melo is what’s known as a ‘ballstopper’.

It is felt throughout the Knicks fan base as well as the media, that Carmelo, the ‘Incredible Sulk’, had the biggest influence in D’Antoni’s leaving. The constant pouting, his body langauge on the bench, towels covering his face ala Stephen Marbury, not getting involved in team huddles, an insurmountable amount of ill-advised shots, and displaying absolutely no signs of any defense, were all part of it.

Carmelo Anthony has the ability to take this team on his back and show why he's the highest paid Knick but his body language doesn't show it. Photo AP

Of course Melo will take no blame for the fact that he has also been shooting a career low 40% from the field during all this. Was that D’Antoni’s fault too?(Steve Novak shoots a higher percentage 47+, from beyond the arc!)

If history has shown us anything in the wide world of sports, it’s that a team’s highest paid player will not usually be traded or released before a head coach. Carmelo’s forcing Dolan & G.M. Glen Grunwald’s hand by his actions and by ‘claiming’ that he wanted to be traded, just exaserbated an already tenuous situation. The same thing happened with Magic Johnson and coach Paul Westhead, Michael Jordan and coach Doug Colins, and Jason Kidd and coach Byron Scott, just to name a few. Clearly there already have  been many precedents set before Melo’s, where a star player was influential in getting a coach fired.

So Melo succeeded in accomplishing the end of D’Antoni’s run as the Knicks head-coach. Okay, now what? Under the assumption that Mike Woodson will be the coach for the Knicks’ 23 remaining games, who should take over the helm next season?

If  he is to be given the benefit of the doubt, let’s start off with Woodson, who I personally like as a coach. He did an admirable job in Atlanta but just couldn’t get them to a championship. If anyone out there feels sorry for D’Antoni and his three year losing record in N.Y., how about Woodson? Here’s a coach, who in his last season with the Hawks went 53-29 and got fired! When is the last time a Knick team won 53 games? When Jimmy Carter was president?

If Woodson, by some miracle, could take this Knick team to the 2nd round of the playoffs, win or lose, he would almost assuredly be a shoe-in to return next year. If however the team continues to flounder in mediocroty for the remainder of the season, there are three other coaches to consider:

Former Jazz coach Jerry Sloan, it has been reported, inquired about the Knicks coaching job even before D’Antoni’s ‘resignation’. Although it would be a huge plus for N.Y., I have my doubts that he would entertain being in the N.Y. limelight and all that comes with it. Utah is just not the big apple…

Blazers coach Nate McMillan? He was being considered before D’Antoni even came to the Knicks three years ago by Isiah Thomas and Knicks owner James Dolan. That would be a long shot as he was recentlty given a contract extension but his job has been in question since the turmoil has begun to infiltrate Portland’s locker room.

The ultimate fan's choice with the most experience would be former N.Y. Knick, Phil Jackson. Photo: shoot-hoop.com

On the down side, Phil is 66 years old and more importantly has had several health concerns over the past few years. But if he’s up to the challenge, I can’t think of another coach that would have the full support of the team as well as the fan base plus the opportunity to come full cycle; from the first team he played with to the last team he’ll coach. Can Philsanity be far away?

3 comments on “From Linsanity to Philsanity…”