The Knicks are in Lin-bo after 3 straight loses…

After consecutive loses to the Celtics, Mavs, and the Spurs, the Knicks need to make some adjustments if they are to contend at the end of the season.

As we’ve seen in almost every game following the loss to Miami, oppositions are defending start up PG Jeremy Lin with double teams and smothering defenses that have worked to stymie his style and his game. Apparently, lame duck coach Mike D’Antoni didn’t use the time wisely during All-Star break to work on this issue or how Carmelo was to be utilized after his return from his groin injury. 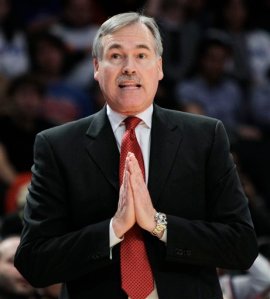 It'll take more than prayers for D'Antoni to right this ship. AP/Kathy Willens

The Knicks were cruising with an 8-1 record led by linsanity and since Melo has returned they’ve stalled at 2-5. He has demanded the ball and been allowed to shoot at will by D’Antoni as witnessed by his 24 shots against San Antonio on Wednesday. Most of the time he creates which takes the ball out of Lin’s hands. But that’s what Melo does. At times it’s like watching Zach Randolph when he was a Knick. It didn’t work when Randolph was here and it hasn’t worked so far with Melo. When Melo, a.k.a. the Incredible Sulk, has played this season, the Knicks are 11-17. When he’s been out of the lineup 7-4. And he’s a liability on defense- although the Knicks didn’t trade for him for his defensive capabilities… 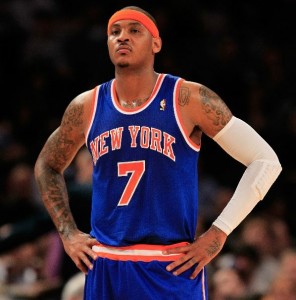 Carmelo Anthony has convinced D'Antoni that he needs the ball more and the coach has complied, but to no avail. Photo: iamnba.com

And speaking of defense, that’s been another issue for this Knick team of late, even though coach Mike Woodson has done an admirable job with this perrenial defensively challenged team. In their last 17 games the Knicks have given up 100 or more points just 5 times. All five have come over their last seven starting with Deron Williams’ revenge game on Feb. 20th.

So as they continue to barely hang on to 8th place in the standings at 18-21, D’Antoni had better find some solutions to this recent funk and maybe will have to do it without his leading defender Tyson Chandler (hamstring-wrist). It won’t get any easier either as the Knicks travel to Milwaukee to play the Bucks Friday and then have a back-to-back on Sunday-Monday vs the 76ers and the Bulls; both in first place in their respective divisions.

Jeremy Lin has been D’Antoni’s savoir so far this season, but if he continues to let Carmelo have free reign on the floor, then Lin will not be able to both facilitate and drive the lane as he did during so effortlessly during that 8-1 stretch leaving the Knicks to continue to be in a state of Lin-bo…