Where Peyton Manning SHOULD play…

So the long anticipated news that Peyton Manning and Jim Irsay’s Indianapolis Colts have finally decided to part ways has been announced. 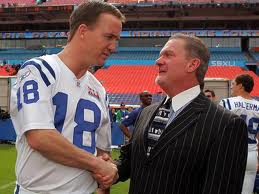 By cutting Manning he will now be easily the most sought after free agent in football that there has been in years. The Colts also won’t have to take a salary cap hit by letting him go, which assuredly weighed into Irsay’s decision as well. Personally, I’m not sure what took Irsay so long to render a decision. It wasn’t like Peyton’s neck was going to get any better…I just think the inevitable just became reality.

Now all the discussions around the league, the media, and the fans will be to determine where Peyton should end up? The logical place and most obvious, would be the Miami Dolphins or the Arizona Cardinals. And more than likely he will end up on one of those teams. Especially in Arizona where there’s this stud WR Larry Fitzgerald and a decent running game to make things easier for him. Of course, the warm dry weather wouldn’t hurt either… But there’s another destination that we think would be perfect for Peyton even though it probably will never happen.

And that would be with the San Francisco 49ers. (that will make a lot of eyes roll…) No, the Niners do not play in a dome and the weather, although not the worst in the league (and not as balmy as Arizona), will not contain snow and temps that fall into the 20’s anytime soon. What Frisco does offer, unlike Miami, is a championship caliber team that will be among the favorites to win it all in 2012. Yes, they already have a quarterback in Alex Smith, but he can be released and replaced by Manning. Smith, an average quarterback at best, only averages around 200 passing yards a game. He did cut his interceptions down this past season but if Peyton is indeed healthy enough to withstand the rigors of an NFL season then why not S.F.?

Should anything happen to Peyton during the season, there is already a quarterback in the wings in Colin Kaepernick. After all, this is the guy the 49ers drafted for last year. So why not have the 2nd round pick out of Nevada study and learn under Peyton until he’s needed and ready to play?

QB Colin Kaepernick was a 2nd round 36th overall pick of the 49ers in 2011. He is their QB of the future and can have his tutelage under Peyton Manning. Photo: sfran.com

We’re still thinking that it’ll be Miami or Arizona but feel that the 49ers would be of interest to and pay dividends for Peyton Manning as well as the Niners. In the meantime, Andrew Luck will have some pretty big shoes to step into when he takes over the helm for the Indianapolis Colts. And after a stellar 14 year career with the Colts, the former 1st round overall pick in 1998 will first have to face the media, along with Jim Irsay, on Wednesday in what should prove to be a highly emotional event.  We wish him all the best…

Peyton Manning's long and successful career in Indianapolis has come to a close. Photo: AP

11 comments on “Where Peyton Manning SHOULD play…”