1. TREVOR BOOKER-PF-Wizards- For those of you shaking your heads, even bad teams have fantasy relevant players. Booker is one such person. He seems to have been given the starting nod again and didn’t disappoint. On Monday, playing his most minutes in a game all season, 43, the 1st round pick of the Timberwolves out of Clemson, scored 19 points. He had just 4 boards but also contributed with 3 steals and 3 blocks. He’s owned in just under 20% of most leagues. 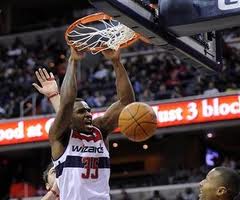 2. NIKOLA PEKOVIC-C-Timberwolves- The 6′ 11″ 290 lb. beast of a center has been tearing it up of late. In his last four games, he’s averaged around 32 minutes a game and started on Saturday vs the Rockets and again on Tuesday vs the Kings. The start coming as Kevin Love sits out his 2 game suspension for stomping on the face & upper body of Louis Scola. In those last four Pekovic has averaged 18.5 points and almost 11 rebounds. Why this 1st pick in the 2nd round of the 2008 draft is still available in 70 % of leagues is a head scratcher.

3. ALONZO GEE-SG/SF-Cavaliers- In his first start at SG this season on Tuesday vs the Heat, Gee poured in 17 points on 6-11 shooting and added 1 three, 1 block, and 2 steals. In his last five games he’s averaged 14.8 points, 1.7 threes, 4 rebounds, and 2 steals in 30 minutes per game. Gee, in his third year out of Alabama, has scored in double digits in all of his last five. He is only owned in 13% of Yahoo! leagues alone and if you’re in need of threes, steals, and points, we recommend picking him up in 12 team leagues.

4. JORDAN CRAWFORD-PG/SG-Wizards- Yes, another Wizards player…Crawford has come on over the last six games scoring in double-digits in all of them. He won’t fill a stat sheet all the way up, but he will give you points (almost 14 in his last 4 games), threes (7 in his last  4 games), and steals (he averages about a steal per game). He backs up SG Nick Young and will come in and play the one behind John Wall as well. You should take a flier out on him to replace a player or use him for streaming on those barren Monday and Thursday night schedules.. Owned currently in around 24% of leagues.

5. CHRIS KAMAN-PF/C-Hornets- With Jason Smith (concussion) and Carl Landry (knee) both out, Kaman will see an increase in his minutes so this could be the perfect time to pick up the veteran. He’s been on the trading block for a while and seems ready to go back to work as he scored a double-double on Monday with 10 points, 12 boards, and 2 blocks in just 22 minutes on the floor. We recommend you take a flier on him for the moment and watch and see if those type of numbers stay consistent. Available in about half of Yahoo! leagues.

IVAN JOHNSON-PF/C-HAWKS- He’s had a double-double in two of his last three games. He’ll play again on Wednesday.

RANDY FOYE-PG/SG-Clippers- In the wake of Chauncey Billups’ season ending injury (Achilles), Foye will be the starting shooting guard and will be part of a three guard alignment which will include Chris Paul and Mo Williams. Foye has started six games on the year, averaging 10.7 points, 4.3 assists, 2.0 3-pointers and 1.8 steals in 32.5 minutes.

#4 Randy Foye will get to start at shooting guard in place of Chauncey Billups. Photo:getfreshdaily.com