We were money last week going 3-1 in the Wild Card playoff games. Here are our picks for this weekend…

1. 49ERS over Saints- Question: If the Saints are the much better team, and they can put up 3,000 points a game and they can roll over opponents like a tank on a caterpillar, then why have the oddsmakers only made this a 3 1/2 point game? Answer: They know it will be a close game and here’s why; the Saints are a mediocre team on the road. They beat the Panthers 30-27 and the Falcons 26-23; both just 3 point wins. They struggled to overtake the Titans 22-17 and lost outright to the Packers, lost to the Buccaneers (by six points), and lost to the Rams by 10! They’re now going up against a 13-3 team, on the road, with one of the best defenses in the league who went 7-1 at home yielding just 10 points a game. And all we’ve heard about this week is how Darren Sproles will run right through the Niner’s D line. Really? Last time we checked, S.F. had only given up one rushing touchdown in their first 14 games. The 49ers in an upset over the Saints. 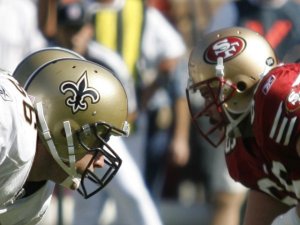 The favored N.O. Saints face off vs the S.F. 49ers this Saturday. Photo: cbssacramento

2. Broncos over PATRIOTS- Yeah, we’re sticking our necks out once again with this pick but we’ve been riding the Tebow express and we’re not getting off until we’re thrown off! When you look at what happened when these two teams met in week 15 and analyze what the Broncos were able to accomplish, then you could easily give them a chance in this week’s rematch. Tebow kept the Broncos close through most of the first half and at one point were down just 20-16. If the Broncos don’t turn the ball over three times, the game becomes winnable. They kept the ball out of Brady’s hand for most of the 1st quarter rushing for 167 yards. That’s 167 yards! For the game the Patriots total net yards were just 58 more than Denver’s. And this was before the Steeler’s game when Tebow turned into “Tethrow”. If the Broncos can do what they’ve been doing but without the turnovers, then the Patriots can be had, although admittedly it won’t be easy…

"I love you Tom, but you're going down this week!" Photo: Washington Times

3. RAVENS over Texans- Two excellent defensive teams square off for the second time this season with the Ravens taking the first game by 15 points in Baltimore. What makes that even more telling is that they did it against Matt Schaub. Now they’ll face rookie QB T.J. Yates and will take their unblemished home record (8-0) into this contest. Joe Flacco stated earlier this week that it bothers him that whenever the Ravens win he fails to garner much of the credit, (which usually goes to the stingy Raven defense as well as to RB Ray Rice). He’ll be out to prove the critics wrong on Sunday and hopes to repeat his performance in the 1st Texan’s game where he threw for 305 yards. FYI,  K Billy Cundiff gets the assist in that game tying a franchise record with five field goals. Ravens!

A good defensive matchup is in the offing as the Ravens take on the Texans this Sunday.

4. Giants over PACKERS- This game should feel like deja vu as it was this time last year that the then number 6 seed Green Bay Packers got hot, ran the table, and went on to win the Super Bowl. We don’t see any reason why the number 4 seeded N.Y. Giants can’t follow in their footsteps. Like the Pack, the Giants have been heating up at just the right time; when the games mean the most. They’ll be facing a Packer’s team that’s dead last in passing  defense but leads the NFL in interceptions with 31. They should have won their last game and if not for Clay Matthews’ pick six on an Eli Manning pass, the final score would have been 35-31 Giants. The Giants also have the most plays over 30 yards in the league and Nicks and Cruz are the two receivers that helped attain that elite mark. The key to this game for Big Blue is the same blueprint they’ve had through their last three games. Run the ball to control the clock & keep the ball out of Rodger’s hands. And continue their stellar pass rushing to help contain Rodger’s and force him to throw a pick or two. Finally, there’s the other key to the game-Michael Boley. He will need to try and stop stud TE Jermichael Finley from doing too much damage like he did in their last meeting. Finley (8 TD’s) has one less touchdown than Greg Jennings and more than either James Jones or Donald Driver. It will also be Boley and Rolle who will need to spy Aaron Rodger’s, as we all know he can run for yardage as well as for a score. It will be cold but it was -15 with the wind back in 2007 when the Giants beat the Pack in G.B., so weather at this stage of the season shouldn’t affect them. It also doesn’t hurt that 17 Giants are on this year’s squad that were there during that great ’07 run. Go Big Blue!

N.Y. Giants are looking to make amends for the 38-35 loss to the Packers earlier this year and move deeper into the post season.