Dorell’s season has been ‘anemic’ at best…

What in the world has happened to G/F Dorell Wright? You don’t see much written about him on any of the usual sports sites; ESPN, Yahoo!, CBS Sports, Fox Sports, etc. and any savvy fantasy team manager would think that odd. We’re talking about a player who was drafted in most leagues with an ADP in the mid 30’s, going around the late 3rd to early 4th rounds. Starting and playing just over 29 minutes per game, he’s averaging an anemic 5.7 points a game, down from the 16.4 ppg from last season, and has gone from 2.4 threes per game to 0.6.

Wright is a former first round pick of the Miami Heat in the 2004 draft and in the six years with Miami, his back up roll only yielded him an average of more than 20 minutes a night once. It wasn’t until he was traded to Golden State last year that he was able to start and show what he was capable of doing. Perhaps it was the Warriors run and gun West coast offense that propelled Wright to elite status with his league leading 194 threes by the end of last season. That said, under rookie head coach Mark Jackson, Wright has more than ‘under-performed’ through the first eight games of this young season.

New Golden State Warriors coach Mark Jackson has many concerns about his team's 2-6 start as well as the poor performance of G/F Dorell Wright. Photo: goldenstateofmind.com

He’s taken an average of 6.5 shots per game vs last year’s average of 14. In two games he didn’t score any points at all! Even with Stephen Curry sidelined with an ankle injury last night, Wright was only able to put up 3 points. Last Saturday when Monta Ellis was out he managed to score just 4 points on 2-10 shooting.

Golden State is 26th in the NBA in points per game at 89.0 — more than 14 points below last season’s average. The Warriors also rank 21st in field goal percentage (42.2). Clearly Jackson must have some concerns, not only about his starting small forward but about his 2-6 team as a whole. As for the fantasy enthusiast that’s reading this now, we’d say you can hold onto Wright a bit longer (he’s amazingly still owned in 92% of Yahoo! leagues) and hope there will be some improvement, or look for someone else to fill any voids in your team’s points and three point categories. Hopefully it won’t be long before Wright ‘rights’ his ship and returns to last season’s stats. Otherwise, like so many recording artists, he’ll be considered just another “One hit wonder”… 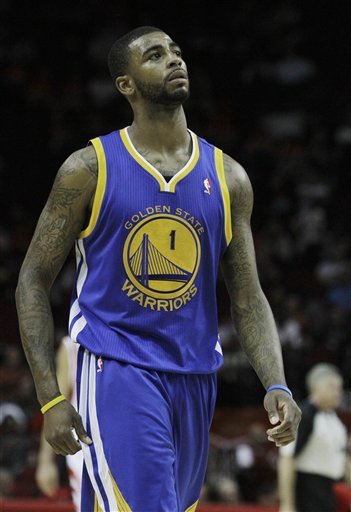 G/F Warrior Dorell Wright #1-Is he worth keeping on your fantasy team? Photo: Getty Images