1. Bengals over TEXANS- T.J. Yates separated his shoulder last week and that probably means that Jake ‘the snake’ Delhomme will get the start. Not that Yates lit up the Texan’s offense when he was in, (scored 20 or less points in the 3 games he started) but DelHomme will throw his share of picks and won’t be the most effective QB to start a playoff game. The Texans, losers of their last three games of the regular season, will have to rely heavily on the law firm of Foster & Tate, and if you don’t think that the Bengals are aware of this then you have lost all touch with reality. Bengals QB Andy Dalton, coming off a week with the flu, just has to get the ball to A.J. Green and have his defense do the rest. The Bengals, who haven’t won a playoff game since 1990 gets the win. 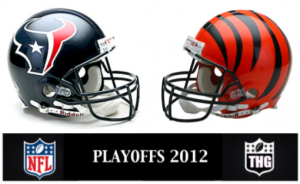 2. SAINTS over Lions- The Lions needed to win last week but couldn’t get the job done against the Rodger’s-less ‘B’ team Packers. Now they have to go into New Orleans and face a Saints team that is 10-1 this year in domed stadiums. Oh, and they haven’t lost a home playoff game since 1992; (4-0). The Lions did lose to the Saints in week 13 and even outscored them 10-7 in the second half of that 14 point loss. Bully, Ndamukong Suh didn’t play in that game as he was serving his suspension for dancing and prancing on a defenseless downed player, but he hasn’t played well this year anyway. Four sacks all year and just one sack and five tackles since he’s been back from suspension. Stafford & Megatron can surely light it up but they will have to be like a pin ball machine to overtake the Saints who average 38 points a game. 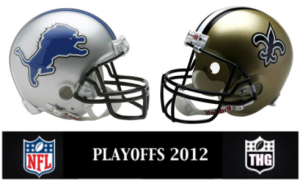 3. BRONCOS over Steelers- Surely this pick has everyone’s eyes rolling like pinwheels, and we agree that picking Denver over Pittsburgh sounds, well, sacrilegious, but in our defense, here’s why we’ve picked ‘the chosen’ team. This Steeler team, this year, has not been your father’s Steelers team. They have been a completely different team away from home this year. In there last three road games, they lost to the 49ers, and had just 4 point victories over Kansas City and Cleveland. Not very convincing especially when you consider that they had a healthy Mendenhall, a healthy safety, and, with the exception of late in the game, a healthy Ben Roethlisberger. Big Ben is now hobbled by an ankle injury that’s not improving which should make him less mobile in the pocket. The loss of Mendenhall (ACL) is not as significant as this hasn’t been a typical year for him and we think Isaac Redmen will be more than a capable replacement.

As for our good friend Tim Tebow, well first of all this game is more important to him than Big Ben as it could determine who starts in Denver next season. He’ll need a much improved performance over his 6/22 for 60 yards last week in order to pull this off and if he can get the rock into Decker for a score or two, that could be enough as this portends to be a low scoring affair. (most of Denver’s games are…). And lastly, if you’re like us and believe in “Divine Intervention”, then you will have to give the edge to the Broncos…

4. GIANTS over Falcons- We elaborated on our analysis of this game in yesterday’s post: https://fantasyfurnace.com/2012/01/06/the-giants-will-win-if/

Good luck to all in the playoffs!

One comment on “NFL Wild Card Predictions-with one surprise…”