1. Lions just squeak by the Vikings-

This was our first of 4 wins out of five on the day. We mentioned the Lion’s propensity for dirty plays and stupid penalties and they didn’t disappoint us. 10 penalties for 76 yards was the final tally, and then the game ended on the Lions 1 yard line with DeAndre Levy grabbing the facemask of QB sub Joe Webb with the ball slipping away to end the game. Of course the there was no call against Levy…An ineffective Christian Ponder through two intetceptions and with the score 31-14 in the 3rd, he was lifted for backup Joe Webb who through for 84 yards and  a TD and ran for 109 and a TD. It was Webb who kept the game as close as it was but the Lions prevailed and ran their record to 8-5. 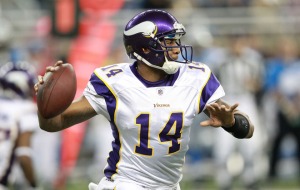 2. Jets handle the inept Chiefs 37-10- We didn’t think this was going to be the blowout that it was given the Chiefs normal stout defense but it was the complete play of QB Mark Sanchez that turned this game into one. He threw AND rushed for 2 touchdowns each and Shonn Greene, who we also mentioned in our Picks, just continued where he had left off the week prior when he scored 3 TD’s, He scored another yesterday on 129 rushing yards. Palko was sacked 5 times making it 11 in the four games he’s started. The Jets ‘D’ held the Chiefs to just 4 yards of offense in the first half! Jets win their 3rd in a row, are 8-5, and travel down the turnpike to play the Eagles next week.

Jets RB Shonn Grene had 187 total all purpose yards vs the Chiefs Sunday and a score. Photo: Jeff Zelevansky/Getty Images

3. Dolphins loose to the Eagles 26-10- This is the one game that we lost last week. How bad did the Dolphins play? Well, it was the most points they gave up since week 4, and the fewest points they scored in a game all year! Philadelphia took advantage of three takeaways to score 24 points during a 9-minute span in the second quarter, and later sent Miami quarterback Matt Moore to the sideline with a head injury. He and backup QB J.P. Losman were sacked 9 times by the Eagles. We highlighted Reggie Bush in our picks and he had 130 yards of total offense; 103 on the ground. Other than him the Dolphins were just outplayed. Didn’t see this coming (nor did Miami…)

Miami head coach Tonty Sparano on the sidelines wondering what happened to his Dolphin offense vs the Eagles. Photo: Mike Ehrmann/Getty Images

4. Bolts blow away the Bills in a rout 37-10- We had said that Rivers was playing more like the Rivers of old and he put on another clinic for the home crowd. His numbers 24/33- 240- 3 and 0 INT with a QB rating of 123.3. Bills QB Fitzpatrick, who we said would have at least his usual 40 attempts passed 34 times with 0 TD and 2 picks to go along with an embarrassing QB rating of 31. Losers now of 6 straight, the Bills year cannot end quick enough. The Chargers who are 2 games behind the Broncos in the AFC West are still gunning for a wild card but won’t have an easy time as they’ll face the Ravens at home on Sunday night.

This Bills Santa looks on in disbelief yesterday in their 37-10 loss to the Chargers. Photo: Donald Miralle/Getty Images

5. Tebow & the Broncos in a another OT thriller over the Bears-

Tim Tebow takes a moment for prayer prior to facing the Bears at Mile High. Looks like his prayers were answered... Photo: AP

The last five words that we wrote last week describing this game was “Broncos in a close one.” Now, that looks like an understatement! At first the game almost put you to sleep as the 0-0 score at halftime would indicate. Tebow was half asleep himself throwing 3 of 16 for 45 yards by the end of the half. And then it was Tebow being Tebow with an 18-24-191-1 performance in the second half. He just finds a way to turn it on every week and so it’s the one game we never turn off no matter what the score is. The Denver ‘D’, which we reccommended in our pickups last week, was strong as ever, giving up just 10 points, 5 sacks, and a fumble recovery. Give K Matt Prater an assist in this one again kicking a 59  yard field goal late in the fourth quarter, and then a 51 yarder that won it in OT. Amazing!