1. LIONS over Vikings- Even though RB Adrian Peterson is expected to play on Sunday, the Vikings just can’t keep pace with the kind of numbers Detroit can put on the board. They scored 48 points vs Kansas City, 34 vs Dallas, and 45 vs the Broncos; all three teams with fairly good defenses. The Lions just need to avoid hurting themselves with dirty play and stupid penalties. As for the Vikings, if Peterson is not 100% then it will probably mean Christain Ponder to Percy Harvin…all day long. We’re going with the Lions.

"Okay, you just keep passing the ball to Calvin and we win... Photo: Wesely Hitt/Getty Images

2. JETS over Chiefs- Considering that in the three games that QB Tyler Palko has started he has only thrown one TD pass (and that was a Hail Mary toss) we don’t see any reason to believe that he will light it up against a good Jets defensive unit. Especially given that Palko has thrown 6 picks in those games. The Jets have won their last two games putting up 62 points on the board. Shonn Greene will hope to build off of last week’s brilliant performance (3 TD’s) and the entire offense seems to be clicking. While we don’t think that this will be a blowout, we’ll expect something like a 21-6 Jets win.

Jets RB Shonn Greene rushes for one of his three touchdowns last week vs the Redskins. Photo: Rob Carr/Getty Images

3. DOLPHINS over Eagles- Both teams are 4-8 but we think the Eagles will end the day at 4-9. The so-called ‘Dream Team’ has played more like a ‘Scheme Team’ this year and we don’t think that getting Michael Vick and Jeremy Maclin back will mean an automatic ‘W’ for the Birds. RB Reggie Bush should have a great game as the Eagles who give up the sixth most receiving yards to running backs, and those of you in PPR leagues already know how valuable Bush can be. In their last seven games, the Fins have won 4 and lost the other 3 by 3 points or less. We expect the Dolphins to continue their winning ways.

RB Reggie Bush runs in for a TD against the Raiders last week. He should have a great game on Sunday vs the Eagles. Photo: AP

4. BRONCOS over Bears- Hard to go with a team that’s lost it’s starting QB and RB. It’s also hard to go AGAINST a team that’s got a QB that’s lead his team to five straight victories. The Broncos, tied with the Raiders for 1st place in the AFC West, have a tough game next week vs the Patriots, and then end the season vs the Bills and the Chiefs which will make them 9-6. Look for Bears WR Johnny Knox to have a good day against a Broncos team that gives up the 5th most fantasy points to WR’s. Of course that’s if QB Caleb Hanie doesn’t throw too many more picks…Broncos in a close one. 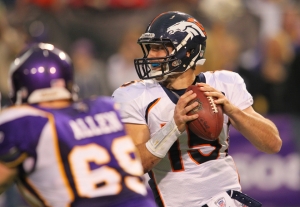 Tim Tebow will face a tougher defense in the Bears and won't have the great passing day he did last week vs the Vikings. Photo: Adam Bettcher/Getty Images

5. CHARGERS over Bills- Monday night the Chargers finally got their act together beating the Jags convincingly 38-14. Rivers played like a top tier quarterback again throwing for just under 300 yards and 3 touchdowns with a QB rating of 146.1. This week, the Bills, losers of five straight, have to travel to the West Coast which is never an easy task. Expect QB Ryan Fitzpatrick to throw the ball his usual 40-45 times with Stevie Johnson to be the recipient of many of them especially in the absence of Scott Chandler (ankle) who has 6 TD’s on the season. C.J. Spiller had the best day of his career last week rushing for 102 yards but the Chargers, who are still in it, should take care of the Bills who are playing out the schedule at this point. Look for a high scoring affair in this one.