1. Broncos over VIKINGS- Look for Tim Tebow to show more of his passing capabilities than we’ve seen in his first six games this year. WR Eric Decker, Tebow’s favorite target, should be the recipient of most of his throws. The (2-9) Vikings, just playing out the string at this point, are still pretty stout against the run. They rank 9th in the league at stopping the run and limit their opponents to just 3.7 yards per carry. Very much in the AFC West hunt, we like Denver in this one on the road where they’re 4-2.

2. Raiders over DOLPHINS- The Fish have been strong on defense but have been unlucky, blowing three close ones to the Broncos, Giants, and Cowboys. Sporting a (3-8) record, two of those wins, miraculously coming in South Beach; (Miami has been a much better road team in the past several years). With RB Darren McFadden sitting for yet another week, Michael Bush more than adequately will fill his shoes against a Dolphin team that’s tough against the run but his passing game abilities make him a must start this week. Carson Palmer threw for 300 yards last week against a capable Bears secondary and Oakland is 4-1 on the road. The long trip to the east coast shouldn’t bother them this week.

3. BEARS over Chiefs- Kansas City QB Tyler Palko will probably get the start in this one but given that he’s thrown 6 interceptions and fumbled once in his last two games, it won’t be long before newly acquired Kyle Orton will get the call. Matt Forte should be able to have his way with a Chiefs porous run defense that gives up the sixth most fantasy points to opposing running backs. Couple that with ‘Da Bears’ exceptional 5-1 home record this season and we think they’ll be 8-4 after Sunday’s game.

Bears WR Johnny Knox could be a factor vs the Chiefs this week. Here he scores on a 29 yard touchdown reception in last week's game vs the Raiders. Photo: Paul Sakuma/AP

4. 49ERS over Rams- Coming off their loss to the Ravens in Baltimore ending their eight game winning streak, the Niners will be looking to not only win the game vs the Rams, but by doing so they will clinch their division. RB Frank Gore will be chomping at the bit as the Rams have already given up 200 rushing yards to two backs so far this year. They have however, been quite sufficient at stopping the pass especially to opposing Tight Ends, making Vernon Davis an iffy play (if you have another TE to put in his place). With S.F. having extra days rest after their Thanksgiving Day game they should cruise by at least ten points or more. 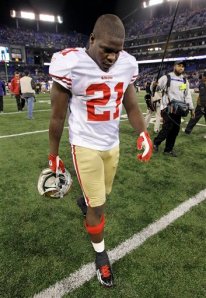 5. Titans over BILLS- The Titans at (6-5) are still in position to put up a fight for the AFC South title. With the injuries mounting against the Texans, Tennessee cannot afford to stumble against any team, let alone the 5-6 Bills. RB Chris Johnson has been coming on each week lately and should have his way with a Bills team that has given up the eighth most fantasy points to running backs.  RB C.J. Spiller, playing in place of injured stud Fred Jackson, did not impress last week rushing 19 times for 55 yards; a 2.9 yards per carry average. With the lack of a bona-fide running game, Ryan Fitzpatrick will be forced to air it out so the Titans need to apply the pressure to have a shot at this one. We would suggest playing Scott Chandler on the Bills side of the ball in a game that figures to be a close one with the Titans pulling it out.

Titans Chris Johnson #28 churns out a nice run against Tampa Bay last week and figures to break the century mark vs the Bills this week. Photo: Grant Halverson/Getty Images