What a difference a week makes. After last week’s disastrous 1-4 finish we were able to reverse those numbers and change them to 4-1. We already spoke about our big Thursday night win in Denver so here are the recaps of the other four games this week:

Browns squeak by the Jaguars ZZZzzzzz-

With the exception of the play above (see video), this game was a yawner. By the time the fourth quarter began it was only 7-7; about as exciting as a baseball game tied 1-1 after 7 innings. A final pass by rookie QB Blaine Gabbert went off the hands of WR Mike Thomas in the endzone making the Browns winners for just the fourth time this year. We said the score would be in the 17-13 or 14-9 area. At 14-10 we were right there.

A Cleveland Brown fan found this game more exciting than we did... Photo: Jason Miller/Getty Images

A bittersweet Raider win over the Vikings- The Raiders beat the Vikings 27-21 but lost WR Darrius Heyward-Bey (head-neck) who was carted off the field in the second half.  Coach Hue Jackson has confirmed that X-Rays were negative and that he had full use of his extremities. It isn’t clear if he will play next week against the Bears. The Vikings also lost a key player in RB Adrian Peterson when he went down with an ankle injury in the 2nd quarter. His MRI was negative and early indications are that he will be questionable for week 12’s game against the Falcons. The Raiders are now 4-1 on the road. 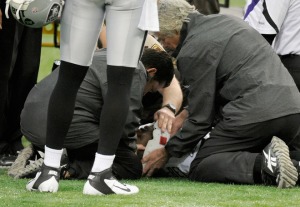 Dolphins blow out the Bills- The resurgent Miami Dolphins have now won three in a row after losing their first seven. They have done it with their defense and with the arm of QB Matt Moore who has thrown for over 600 yards, 6 touchdowns and just one interception over these last three wins. The Bills in contrast appear to be free-falling- losing their last three games after beginning their year 4-1. And their offense has been virtually non-existent, scoring just 26 points in the last three games. Unfortunately another key injury put RB Fred Jackson on the bench for most of the second half. 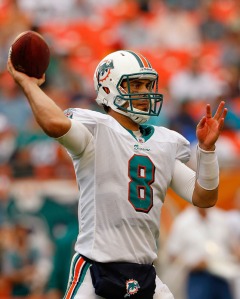 Unlucky ‘Skins fall to the ‘Boys in OT 27-24- If K Graham Gano hits the 52 yard field goal in OT,  we don’t get our fourth win… It went just wide right. That gave Dallas another chance for the win and they took advantage of it. QB Tony Romo threw a 26 yard completion pass to WR Dez Bryant which set up the winning Dan Bailey field goal. The Redskins fell to 3-7 losing their sixth game in a row. We can’t even knock QB Rex Grossman in this one as he passed for 289-2-1 and even scored a rushing touchdown. These two division rivals historically have played in more close games than we can remember and today’s overtime game was no exception.

Graham Gano #4 of the Washington Redskins reacts after missing a third quarter field goal attempt against the Dallas Cowboys at FedExField. (Photo by Rob Carr/Getty Images)