…”That was the stupidest play in NFL history!”

We had our worst week of the season so we’ll start with the worst game of our five picks; Patriots 37-Jets 16. How bad was it? It was so bad that  “GAG GREEN” gave up more points to the Patriots at Met Life Stadium/Giant’s Stadium, than to any opponent since Rex Ryan took over as the Jets’ headcoach! The now famous ‘timeout’ that Sanchez called with 1:20 left in the 1st half (AND 17 seconds left on the play clock) was truly a bonehead play. Not to a shocked Tom Brady however, who proceeded to march 80 yards downfield in six plays in just 1:11 capped off by a touchdown pass to TE Rob Gronkowski. The momentum which had been with the Jets following Sanchez’s rushing TD, switched to the Pats and the Jets never really recovered. The Jets have their work cut out for them now as they will play the Broncos, in Denver, in four days.

The Giant’s were down by seven to the NFC West division leading 49ers when they got to the redzone with 1:53 to go in the game. Most felt like they were going to have another in a series of 4th quarter come- from- behind miracle finishes they’ve enjoyed all year. But that was not going to happen on S.F.’s watch. It was 4th and 2 on the 49er’s 10 yard line. Knowing that S.F. hadn’t allowed a rushing TD all season, Eli went back to pass. WR Victor Cruz was open. Eli let the pass go only to have it swatted down by defensive tackle Justin Smith. Game over. We said that Manning would have to pass at least 35-40 times in this game and that’s exactly what he did: 26/40 311 yards. Although not an excuse, the Giants did lose outstanding linebacker Michael Boley (hamstring) for the second half as well as cornerback Aaron Ross (thigh contusuion) and were without the services of RB Ahmad Bradshaw. These two teams, both leading their respective divisions, will probably meet again before all is said and done. 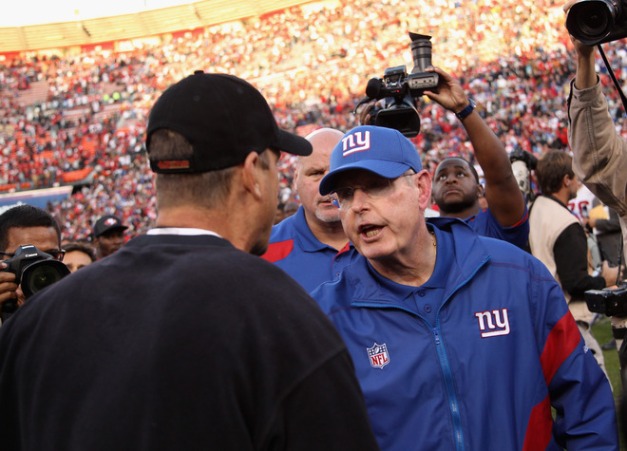 Eagles blow another one… Cardinals over Eagles 21-17

The Philadelphia Eagles, the self-proclaimed ‘Dream Team’ had a nightmare of a game by blowing a fourth quarter lead for the fifth time this year. They made John (don’t call me Red) Skelton look more like Aaron Rodgers, and the Arizona Cardinals, winners of two straight come-from-behind wins, look like the Green Bay Packers! A late scatch of WR DeSean Jackson, who had missed a Saturday team meeting, didn’t help their offense. Skelton, a fifth round pick out of Fordham in last year’s draft, threw for three touchdowns, the last one to WR Early Doucet was the game winner with 1:53 left in the game. With this loss it looks like the NFC East will be a two-team race between the Giants and the Cowboys.

Cardinal WR Early Doucet celebrates after scoring the go ahead touchdown in the Cards 21-17 win over the Eagles. Photo: Rob Carr/GettyImages

Not much to say about this lopsided affair. The Titans put a ‘spy’ on Panther phenom Cam Newton and it paid dividends. He was sacked five times and intercepted once. Meanwhile, as we said in our picks, the Panthers were not adept to stopping the run and it showed as  RB Chris Johnson had 174 yards from scrimmage; 130 on the ground. It was the first time he ran for over 100 yards since Oct. 2nd. The Titans, besides their stellar defense, were able to garner almost 400 total yards of offense and take away another win from the furnace…

Titan's RB Chris Johnson flexes muscles after scoring in a laugher over the Panthers 30-3. Photo: Brian A. Westerholt/Getty Images

In our only win, ‘snif-‘snif’, the Texans did exactly what we said they would. The law firm of Foster & Tate accounted for 249 all purpose yards and three touchdowns. Not much of a game against a decimated Tampa Bay team. Losers of their last three games in a row, they’re already saying, “Wait till next year.”

2 comments on “OUR PICKS-The Next Day…”