1) KNOWSHON MORENO-RB-Broncos-We like Knowshon as a must add this week for three reasons: The obvious one is that Willis McGahee is out with a hand injury. (And might be gone up to 2 weeks). The second is that the Lions have been generous- yielding around 5 yards per carry to opposing backs. They don’t give up a ton of fantasy points to RB’s but that’s where the third reason to pick him up comes in. Knowshon has excellect pass catching abilities and Tebow gravitates towards the ‘dump offs’ and screens in the backfield making Moreno a double threat. Between injuries to a handful of RB’s, and bye weeks, he is a must add & incredibly is still available in 40% of Yahoo leagues.

2) JABAR GAFFNEY-WR-Redskins- Not a big fan of recommending any Redskins as a rule, but Gaffney is the exception this week and for the near future. We thinkhe is a good pickup as a WR2/WR3 in most leagues. Santana Moss, the most targeted receiver on the ‘Skins, will be out at least a month while recovering from surgery on his broken left hand. That leaves Gaffney and TE Fred Davis as the probable most targeted receivers this week vs a Bills team that gives up the 10th most fantasy points to WR’s. If the front line can give Beck some time, Gaffney, who has averaged around 60 receiving yards a game this year WITH Moss in the game , should end up with a line like 8-90-1. 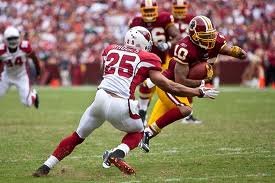 3) BERNARD SCOTT-RB-Bengals- Cedric Benson begins serving his newly reduced two game suspension this week making Scott a good add as the lead back. The good news is that the Bengals have always relied heavily on their running game, so this will work well for the 6th rounder who has 50 rushing yards and a TD as a back up over the past two weeks. The bad news is that the offensively pathetic Seahawks have been extremely stingy against the run allowing a meager 3.1 yards per carry on the ground. Limit your expectations with Scott but use him with confidence as your flex or RB 2.

With Cedric Benson on suspension this week, RB Bernard Scott takes over as lead back for the Bengals. Photo: Zimbio.com

4) ANTONIO BROWN-WR-Steelers- We think Brown is a must add this week because he goes up against the Patriots who will keep Rashard Mendenhall’s numbers down as they allow only 80 yards per carry to opposing backs. This will open the passing game for Big Ben especially with the Pats yielding miles of real estate to WR’s. Brown will become an even more valuable asset this week should Hines Ward not get the nod because of his badly sprained ankle. He already showed last week that he’s more than a capable wideout catching 7 passes for 102 yards vs the Cardinals. Still available in 53% of Yahoo leagues, he makes a great pickup in most leagues.

5) SAN FRANCISCO 49ERS DEFENSE- The Cleveland Browns fly into the Bay area for a match up vs the 49ers this Sunday. This is the same Browns team that only were able to squeeze out 6 points against the lowly Seahawks. They will fare no better vs the 49ers who give up the fewest fantasy points to RB’s in the league, which will not help Peyton Hillis who probably gets the start for the visiting Browns. Should S.F. be taken in your league(s), Houston offers a decent backup going up against the Jaguars who more than likely are physically & emotionally drained after their stunning (and boring) win vs the Ravens on Monday Night.

49ers Defense should do well at home vs the Browns. Photo: withfriendship.com

We couldn’t let this week’s picks go by without gloating a bit after touting DeMarco Murray as our 3rd pickup for week #7. By now you are all familiar with his numbers from last week. But in case you’ve been busy ‘Occupying’ some city, he ran for 253 yards and a score while averaging 10 yards per carry on route to an amazing 31 fantasy points! Good luck to all this week!

RB DeMarco Murray was a super stud for the Furnace last week-Photo: topics.lifestyle.com

3 comments on “THE FURNACE’S WEEK 8 PICKUPS”