FROM  EXCITEMENT TO BOREDOM..

PANTHERS over REDSKINS- We picked the Panthers in this one, saying that Cam Newton would have 2 rushing TD’s (he had one) and that Steve Smith would win the battle over CB DeAngelo Williams, which he won (7-143 yards). We also said Cam would finally get his first win, and he did; 33-20! He threw for 256 yards and 1 TD to go along with an outstanding 127.5 QB rating. The Panthers are home next week to face Christian Ponder and the 1-6 Vikings so we could be seeing back-to-back wins for the rookie phenom.

BRONCOS over DOLPHINS- In as exciting a finish to an overtime game as you’ll see, the ‘Age of Tebow’ has begun as Tim Tebow rallied his troops with just under three minutes to go in the fourth quarter. He threw two touchdown passes to force the game into overtime while coping with the unruly Miami fans who yelled jeers at the quarterback whenever he missed a receiver or failed to convert on 3rd downs. Ultimately, it was a sack of Matt Moore (18 sacks in his last 9 appearances), that gave the Broncos the ball and then a Prater field goal three plays later sealed the deal for our man Tebow and our pick- the Broncos. Denver face the Lions (3-0 road record) at home next week. 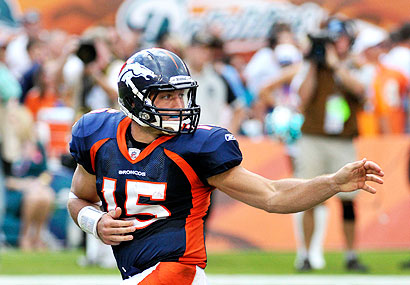 The 'Age of Tebow' has begun! Photo: Getty Images

STEELERS over CARDINALS- In our third correct Sunday contest, Pittsburgh got by the Cardinals 33-20. RB Beanie Wells left in the 2nd quarter following a knee sprain and so Arizona’s running game was severely compromised. (Steeler veteran Hines Ward also left the game in the second half suffering from an ankle injury). It wasn’t the Steeler’s usual pound and ground game that helped to put the Cards away- (Mendenhall/Redman combined for 61 yards on 19 carries)- instead it was Big Ben’s three touchdown passes on 361 yards passing yards and a QB rating of 121.8 that led the Steelers (5-2) to their 3rd home victory. They’ll face off against the 5-1 Patriots at home next week in what should be an exciting game.

The Steeler faithful were in attendance in Glendale, Az. Photo: Karl Walter/Getty Images

BROWNS over SEAHAWKS- We picked the Seahawks- only someone forgot to tell them how to play football because what we saw on Sunday was NOT football. Not sure what it was but 137 total yards of offense in the NFL is just not enough to win games. It was, however, the UGLIEST game of the week! In a nutshell… ZZZZZzzzzz. And it won’t get any easier for the ‘Hawks next week when they face the defense minded Bengals (4-2). 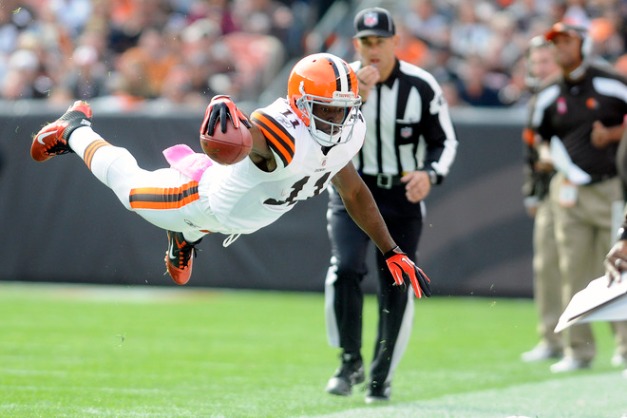 WR Mohamed Massaquoi dives for a 1st down in the 2nd qtr. in the most exciting play of one of the most boring games ever! Photo: Jason Miller/Getty Images

JAGUARS over RAVENS- As Yogi Berra would say, “it’s like Deja Vu all over again.” We thought we had seen just about the most boring game of the year on Sunday when the Seahawks took on the Browns in a yawner that ended with 2 field goals 6-3. Well, last night’s MNF gave that game a run for their money. A 6-O halftime score highlighted by the Ravens not even converting a 3rd down play all half! I had to use smelling salts to help get me out of my trance… I mean the Ravens didn’t fare much better than the Seahawks. On offense, Baltimore could only rack up a paltry 146 yards of total offense (the Seahawks had 137). Ray Rice ran for 28 yards. 28yards!!! And how hard was it to stay awake watching both teams kick 16 punts! Between the yellow flags being thrown about every 5 minutes & challenges on calls (believe Jack Del Rio called 4-5 at least) it would have been better to spend those 3 hours walking on hot coals. In the end the Jags, with their 4 field goals, won the marathon 12-7 and making us lose our 2nd game of the week.. It doesn’t get any worse than this… 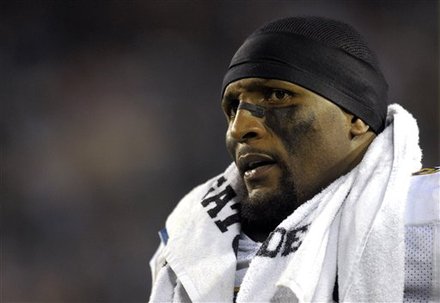 2 comments on “OUR PICKS-The Next Day…”