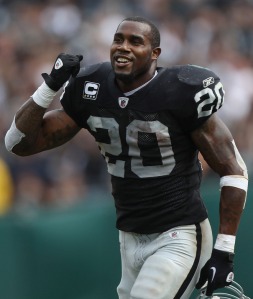 RAIDERS over JETS 34-24- We picked the Raiders and mentioned last week that the Jets had league low numbers in rushing. This pattern continued at the Coliseum yesterday when Shonn Greene rushed 15 times for a total of 59 yards; 15 of which came on one attempt. The Raiders on the other hand ran for an incredible 234 yards which provided them with a balanced attack most of the game.It won’t get any easier as N.Y. travels to Baltimore next Sunday and play a Raven defense ranked one of the best in the NFL.

BROWNS over DOLPHINS 17-16- The Fish, our choice, should have won this game outright. They outplayed the Browns and led 16-10 with 43 seconds left in the fourth. A 14 yard TD pass from Colt McCoy (19-39 210 yds.) to Mohamed Massaquoi sealed the deal for the anemic Browns who had 70 yards rushing and 280 net yards of total offense. They still have done nothing to impress us.. They have won their last two games against two teams with a combined record of 0-6.

GIANTS over EAGLES 29-16- Someone forgot to tell the Eagles that they are supposed to be the NFL’s “Dream Team” because they certainly didn’t play like they were. The combined stats of Michael Vick and (sub) Mike Kafka, 20-30 201 yards- 0 TD’s-3 Int’s tells a big part of the reason. Eli Manning played one of his best games in a long time throwing for 4 touchdowns and no interceptions. He connected with fill-in Victor Cruz three times for 110 yards; two of them for TD’s. The Giant D came up big as well with 2 sacks, hundreds of rushes on Vick, and 3 picks. It was, as we mentioned last week, their first win vs the Eagles in their last seven tries. Question is, will the G-Men have a let down next week when they travel to Arizona to play the 1-2 Cardinals…