Around 75% of the baseball season is now behind us and as most Fantasy Baseball Leagues will be entering the playoffs next week, it’s time to unvail The ‘Furnace’s 10 Fantasy Busts of the 2011 season. Whether through just disappointing play, or injuries, or both, here are the first five who made our list:

shoulder since Aug. 3rd, he has totally regressed this season. This is a lifetime .306 hitter who has averaged just under 27 hrs. over the past 4 years but is currently batting .243 with 10 hrs. Can you spell …B-U-S-T?

4) Ubaldo Jimenez-SP-Indians- Granted he’s moved to the DH’d A.L., but this season he didn’t fair too well with the Rockies either. Last year, Ubaldo was a 19 game winner with an ERA of 2.88 and a WHIP of 1.15. His ERA has now ballooned to just under 5 while his WHIP stands at 1.44. Couple this with just 7 wins and you have to wonder why he is still owned in 93% of Yahoo! leagues.

5) Alex Rodriguez-3B-Yankees- Injuries notwithstanding, his numbers are just totally down. He’s hit 30 hrs. in each of the last 2 years. The last time he hit 30 hrs. or less was back in 1997! Since the steroid issue and hip surgery, maybe now his body is beginning to show signs of breaking down after 18 yrs. in the major leagues… 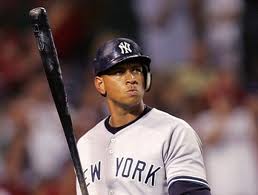